CCP Bayesian brings us a new Dev Blog, detailing the upcoming changes to the Hacking and Archaeology sub-professions in EVE.

Team Prototyping Rocks has been working hard on improving the depth of gameplay that explorers will enjoy in their day to day lives. The devil is in the details and until this release the details behind Hacking and Archaeology have been very sparse. Our brief was to make the tasks you do in sites much more immersive and interactive.

Now I’ll admit that hacking/archaeology in EVE has never been one of those things I’ve fiddled with a ton.  It’s not that there’s no reward for doing it, it’s just that the activity itself isn’t awfully exciting. With the upcoming Odyssey expansion, CCP is hoping to change that for the better.

Instead of the current mechanic of shooting all the NPCs in a site, and hitting locked containers with your specialized module until they open, and looting the contents when it unlocks. If you’ve done salvaging then you can see the similarities here. With Odyssey will come a new minigame, pitting you against the device you’re trying to unlock. 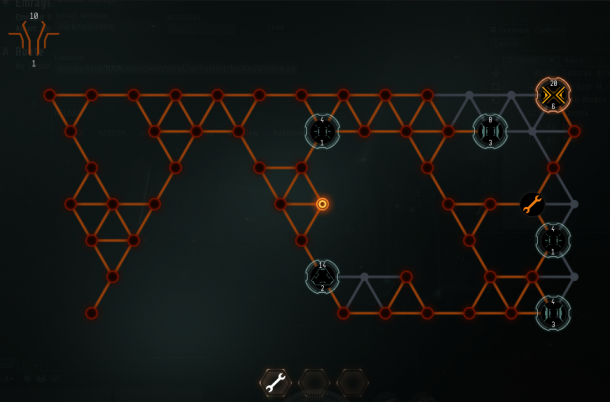 The window shows the user the computer system mapped out as a network of interconnected nodes. One of the node’s contents is already visible as this was the penetration point of the activated module. Users hack a system by exploring the nodes adjacent to the nodes that they have already explored. Their goal is to find the core or cores in the system and taking them over by destroying them.

If all this sounds a lot like something you may have seen before, here’s a screenshot from Deus Ex: Human Revolution for comparison. 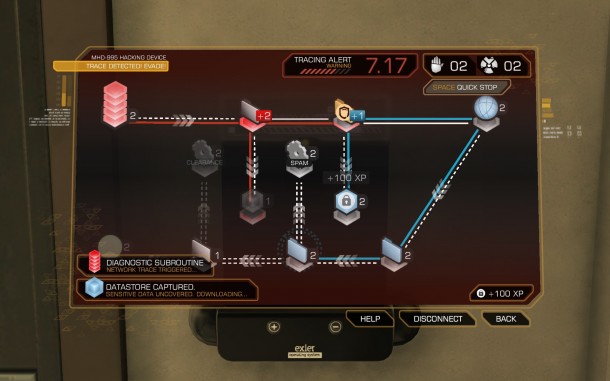 Deux Ex’s hacking was an easy to grasp concept that could still present challenges as the game progressed, and I feel it’s an excellent thing to draw inspiration on.  The addition of a minigames to EVE in order to spice up the hacking and archaeology processes is a fantastic one in my opinion, adding an element of randomness and interactivity to what is a mostly passive process right now. The blog also speaks of future enhancements which will bring more variety to this in the future.

Your success in the game is rewarded with a kind of loot piñata of sorts, whereby the contents of whatever you’re trying to get into spill out into space and disappear after a few seconds.

Once the core is destroyed the system has been hacked and the module forces the site to scatter its contents from the cargo hold into the vacuum of space. The hacker, his friends and anyone else around can then collect the scattered contents. We’ll be releasing another devblog shortly that will go into details of how the contents of the site are distributed and how they are collected.

It looks awesome when it happens, and I like their concept of teaming up with others providing a benefit to collecting the loot. Most people will probably do this solo, and I’m willing to bet someone will come up the perfect ship setup to collect it all without needing others, but CCP’s sentiment with this is a good one.

Odyssey is proving to be an interesting expansion for me. Playing around with some of these features on Singularity gives me that sci-fi nerdy feeling of exploration that wormholes did when they first came on scene.  There’s just something cool about jumping to a new system and having a sensor sweep light up the anomalies for you. In systems you frequent, it’s a little like discovering a new room in your house you didn’t know was there.

Since it was first introduced, very little has been done to keep things fresh and interesting; hell, I’m sure there’s a huge percentage of people who didn’t even know it existed, much less gave it a try or focused on it as a profession. My hope is that making this kind of content more front-and-center to more people gives CCP incentive to continue to develop it.