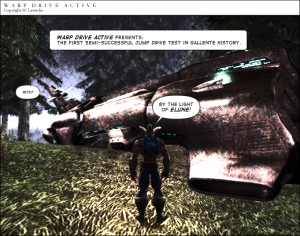 WDA’s back! So what the hell have I been doing, you might ask. Well lets break down the events of the last few months. I’ve had a kidney stone, which is no picnic as anyone who’s had them will tell you. This one was large enough that it was causing issues with my kidney, which is not a good thing, but I’m doing much better now. A month or two of that and I’ve become something of a connoisseur when it comes to narcotics now (morphine for t3h w1n!). What else… I quit the job I was working at for like six years and got hired right away at another place, and that has turned out to be one of the best decisions I ever made. I got my car back finally (I’ll post a picture somewhere soon) and is running perfectly. Even had its first servicing at 6000km, the guys at the dealership had a chuckle over that considering I bought it last year. On the gaming angle I played EQ2 and WoW, for enough time to determine that neither is worth my gaming dollars right now. They’re decent, just not for long term play in my opinion. Oh and Nexus: The Jupiter Incident. I HIGHLY recommend EVE players check this baby out, it’s insanely great. Anyway it’s good to be back!