In case you’ve been living under a rock the last few years,  you will have noticed a huge surge in video game streaming. From major events in the realm of exports to the everyday player at home, on demand streaming is here to stay. Maybe it’s time that EVE Online gets on the air. 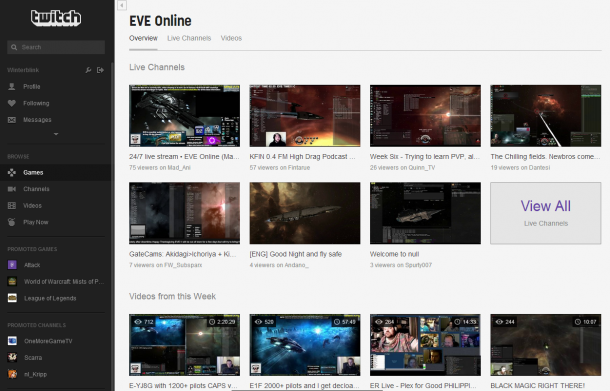 Now its not like there aren’t any EVE streams going on. Even a cursory glance on Twitch.tv shows around a dozen active streams during prime time here in the western hemisphere. Popular channels such as Mad_Ani, SirSqueebles, and TheMittaniDotCom attract hundreds of viewers on a regular basis, and when major conflicts are occurring those streams broadcasting them will have thousands of viewers. Even CCP has been using streaming services more frequently these days, showcasing events and new features. 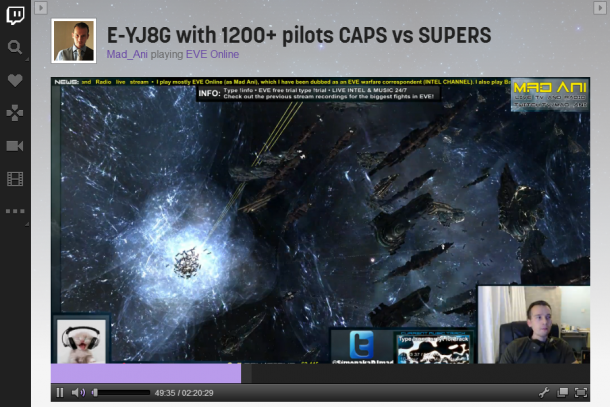 There is precedent for this concept. Games such as War Thunder and Planetside 2 have Twitch integration built in, as does EA’s Origin client. Even NVIDIA’s ShadowPlay feature allows for recording and streaming of gameplay through the driver software.

The recently released PlayStation 4 has built-in streaming capability to two different services, and has been an interesting feature to observe in use.  Players can easily stream the full user interface, or include viewer chat and a broadcaster camera shot if they own that peripheral. The ease at which people can start a stream and interact with viewers through a console has been interesting to observe. A feature that people had thought wouldn’t be used to any significant amount has become extremely popular with streamers and viewers alike. 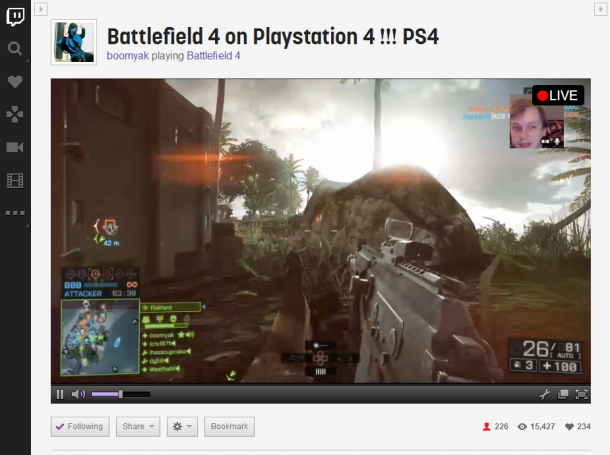 Providing integrated streaming options for EVE Online could provide easy to use tools for any player to broadcast their gameplay for others. CCP could even go so far to build an interface like the PlayStation 4’s, stylizing it to fit in with established New Eden aesthetics. They could even allow for the selection of themed interfaces for each of the four major races in the game, nullsec organizations, and one themed after the corporation or alliance you belong to.

It’s worth noting that there’s a signal to noise issue that could arise from this. EVE isn’t exactly an action packed first person shooter, and it’s probably not everyone’s cup to tea to sit and watch someone ship spinning in stations. However, just like anything in this game, there’s always going to be someone interested in what others would consider to be mundane.

Showing all facets of the game to a wider audience only serves to highlight the diversity of experiences EVE affords, and an integrated, tailored streaming component could allow anyone to share those with others.

What do you think, is it worth CCP putting some effort to enhance the EVE client with this kind of functionality, providing it doesn’t take away from other more pressing development efforts? 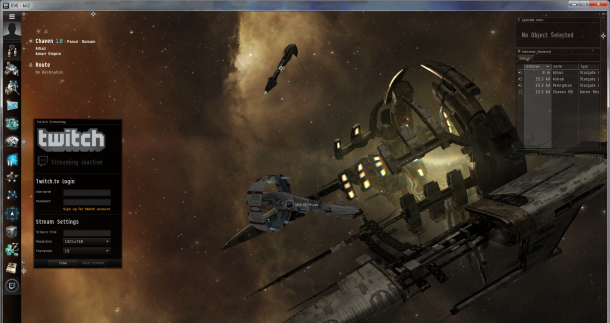 Looks like CCP’s had this one waiting in the wings for a Rubicon point release.

In the latest dev blog titled “Twitch Integration is Here!”, CCP Rise details the integrated Twitch streaming functionality. I still say there’s an opportunity to theme the stream with EVE livery, but who knows what the future will bring for this feature.

I for one can’t wait to see what players put out there for us to watch.