The second New Eden Open tournament is well underway, and so far things have been going along smoothly. The streams haven’t crashed, there has only been one fire alarm, and lots of ships have exploded.

As we roll on towards the final days of the tournament, let’s look back and pick things apart so far, and check if it’s worth your time to continue watching.

The commentary team for the NEO tournaments continues to be sourced directly from CCP itself. So far, the following four have been present:

The actual commentary has been a bit of a mixed bag, but we’ll get into that a bit later.

CCP continues to use Twitch as their tournament broadcast stream provider, a decision which has been proven to be solid. While there still are people who have personal or technical issues with Twitch, they exist as a minority, and the stream is more than capable of handling thousands of viewers at high quality with no real issue.

Early tournaments with other more specialized streaming providers have resulted in sub-par experiences for practically everyone. Now you can capably sit on the toilet with your phone, streaming yesterday’s dinner right along with the matches.

A decent gauge for whether tournament rules are balanced is when there is a decided lack of perfect setups. So far, an “I Win” setup hasn’t manifested itself, in fact there’s been a significant amount of experimental setups that have resulted in interesting matches. MOBA-style pre-match band keep both teams on their toes, ensuring that the ones that pay attention to their opponents’ previous matches may have a better chance of being victorious.

Even the teams themselves have been conceptually interesting this time around.  WeHURT is comprised entirely of EVE streamers, and their fans have created some excellent buzz around their matches. And then there’s Team CUBE, a full eight ship team orchestrated by a single multiboxing player.

While it doesn’t have the same flair for the dramatic that the alliance tournaments have, what with the larger teams and huge setup bankrolls, the matches here have so far been quite entertaining.

Lets get the good out of the way first. The video production itself continues to be a top notch affair spearheaded by CCP Loxy and his vast empire of assistants and producers. We’re treated to an event that comes off like this is the only thing that CCP does for its paycheck.

The Match UI hasn’t changed much from previous tournament UI iterations, and for the most part this is a good thing.  It services the match well without being cluttered, and manages to distill the complicated details of EVE PVP down for at-a-glance understandability.

The colored light for the presenter glasses continue to be a great subtle cue for both the audience and the presenters to get ready for the next fight. A long time ago there was rumor it was only for show, but presenters have often drank from the forever bubbly liquid complete with seemingly immortal ice cubes.  Even CCP Bro has imbibed from time to time, from his glass that no doubt contains the coolant necessary to keep his circuitry from overheating.

It’s unfortunate that with the good, we must also consider the bad.

The camera work in studio has been about as dull as you can make it. A flat, static angle on the presenter desk will dominate most of what you will see between matches, making the evening news seem like a summer blockbuster by comparison.  Almost a full third of the screen is left essentially empty, without any interesting background to speak of.

This translates into the matches themselves, where the vast majority of time is spent blandly spinning around the centered ship being viewed. It’s almost as if the people in control of the match cameras forgot that there is a right mouse button that when held down lets you offset the camera to look at other things. The dynamic camera system built into the game, which makes this kind of dramatic angle a breeze to maintain, is never used. The audience is left with the most boring, awkward way to watch the combat. 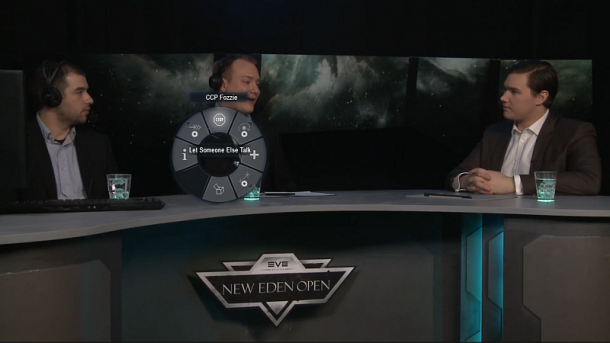 Between matches we’re treated to the above-mentioned quartet speaking about the previous fight and giving some insight into the match to come, and many of those details are well spoken to. However lets get into how the presenters themselves are doing:

CCP Bro is a new host to tournaments, and I’m totally befuddled by his selection for that role. I expect that he unwinds after the days hosting the tournament by going home and skinning one of the victims chained up in his basement. We need a different kind of host charisma than that of Hannibal Lecter.

CCP Dolan has caused many on Twitch chat and Twitter to consider the plethora of ways that he could be made to cease speaking. Dolan’s a pretty aloof guy anyway, but some of his jokes have fallen flat so hard they have probably left a mark on the studio floor. He’s trying too hard to be the tournament cool guy, forgetting that all he has to do is speak intelligently about the game and the matches to accomplish that.

CCP Fozzie has no problem with speaking at all. In fact it’s got the point that several minutes will pass by, with just a single non-stop run of words from Fozzie talking about everything from the match to the how German chancellor Angela Merkel broke her leg skiing. It’s a kind of oral diarrhea that can be completely off-putting to someone who maybe isn’t an EVE player, expecting some sort of reasonable explanation as to what is going on in the matches; instead they find themselves on the receiving end of an amphetamine-enhanced word dump, catered more towards the EVE elites. He’s a smart guy who seems genuinely nice, but he needs to cut down on the coffee, bring it down a notch and remember his whole audience.

CCP Rise is an extremely knowledgeable and well spoken guy, but I find he’s overpowered too much by some of the others. Hell, he actually made the statement at one point, “I actually stopped listening to you guys five minutes ago”, completely giving up on talking about something tournament-related. This is the one guy who is really good for explaining things to the masses and he should be a perfect counterbalance to the others. I find it sad that his contribution is being marginalized by a clown, an auctioneer, and a serial killer. A bit more assertiveness and he’d be prime for the host seat.

It’s all a bit hard to take, especially when matches end quickly and we’re left with the commentator team having to stretch the conversation for several minutes. This would be the ideal time to explain some EVE concepts to viewers, or to show highlights of previous matches for them to talk about.

Gripes aside, and they are admittedly quite subjective ones, I can only commend CCP for running not one but two tournaments throughout the year. While these are definitely marketing tools, the time and expense of having this many resources push many hours of content out for free has to be immense.

Audience members in Twitch chat were well engaged in the matches, and had some hilarious ideas for other tournament types.  Ideas such as a Team CUBE inspired multiboxer tournament, and a CCP vs CCP honor match came up.  While the latter has been done in some form in the past it would be hilarious to see it formalized. How about a commentator vs commentator tournament, where they must play and commentate at the same time?

I just hope that CCP understands the continuing importance of these community events, and supports those efforts over ones which have a far worse return on investment.