A new, more modern, updates page for the game went live today. Lets take a look at what’s there, and whether it’s a useful addition to EVE’s web presence.

CCP just announced a new dedicated site for game updates, at updates.eveonline.com. Now normally when major patches have happened, we’ve seen specific feature pages created for each that get all markety about what new features are coming. Going forward it seems that CCP is going to keep updates to this new single URL for convenience. 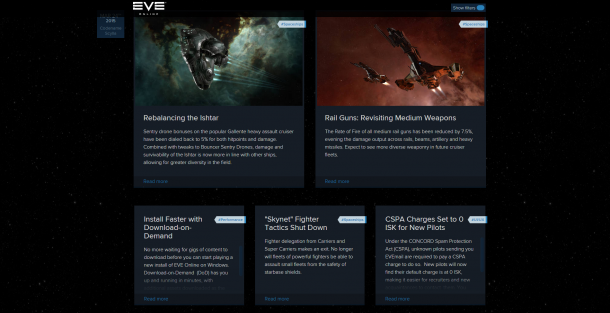 In its current state, I find the new site to be a hashtag-happy Pinterest clone that celebrates its own BIG BOLD DESIGN than provide a useful mechanism for seeing what updates are coming/released. The above screenshot shows how much unused space is present with a maximized browser at 1920×1080, to showcase five links to dev blogs and forum posts.

There’s a mechanism for filtering posts, but currently that contains a small, useless list of hashtags. Presumably over time this will built out into something more meaningful but in its current state you cannot even filter by named expansion. If they intend to tag everything to such detail the filter will become a ginormous tag cloud that will become rapidly unusable for the end user.

There’s a lot of room for improvement here, so hopefully they can iterate on this page over time to make it more useful.