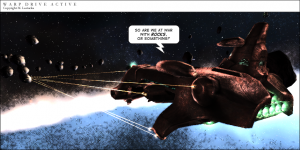 I’ll admit, I’ve been pretty lax lately with the comic. :( I’m dying to see what Shiva will bring to EVE in terms of fleet balance and content, so I’ve been passing the time doing pvp (in a frigate, woo). In between EVE sessions I’ve been trying out City of Heroes, which is entertaining in a seriously uncomplicated sort of way. It’s no EVE, though!