No, I’m not kidding.  According to multiple sources, it looks like Band of Brothers — arguably the centerpiece of alliance politics for years — has closed its doors.

It also looks like someone wasted no time in dropping the cash to start a new alliance with the same name, which means there’s no way the original BoB folks will get that alliance name back.

It’s still too early to tell for sure what’s transpired, but one post on the forum is chilling for those in BoB:

One thing’s for sure, there’s probably an insane rush for BoB space underway right now.

Looks like ISD has wasted no time in writing up a news article about what happened.

A few hours after midnight on 05.02.111, Band of Brothers alliance was disbanded. The loss of formal alliance status forcibly relinquished all Band of Brothers held sovereignty, and thus is expected to render all their outposts vulnerable, pause the construction of all motherships and titans currently being built in their capital assembly arrays and interfere with the proper fuctioning of cynojammers and jump bridge waystations at their control towers. This effect has never been seen before on such a huge scale, so there is much uncertainty about the precise effects.

And the understatement of the year goes to…

There’s some handy forum (CAOD) links for more information at the bottom of that article, but all signs are pointing to Goonswarm as the culprit for the takedown.  It’s also looking like the public might get a peek at the BoB director forums in the near future, as the infiltrator has saved his/herself a copy.

Personally I don’t shed a tear for any group entity that falls prey to it since there’s a high probability they were doing something similar to others.  I do have to sympathize with the pilots who had nothing to do with anything other than logging into the game for their fun, and today will do so with their world turned upside down.

Then again, the threat of corporate espionage scenarios like this is one of those things that makes EVE uniquely EVE. 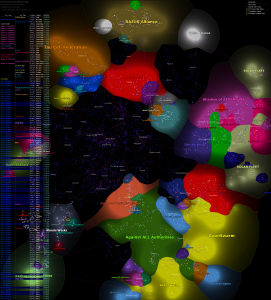