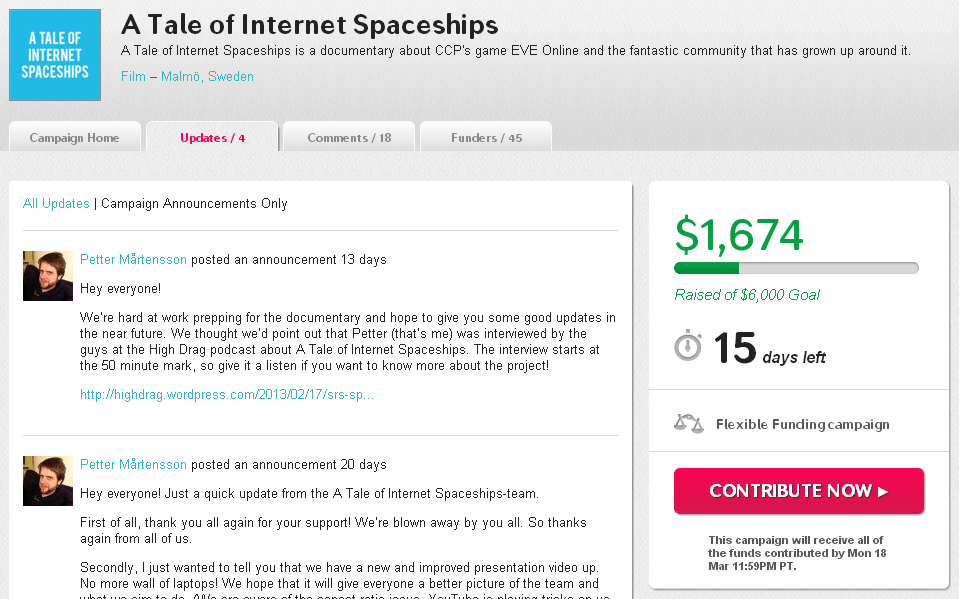 One of the fun things about doing commentary on the EVE universe is watching what the rest of the community does. There are people out there who sink massive quantities of their own personal time to producing community material and services, from simple blogging to full on feature length machinima.

So far though, nobody’s actually sat down and tried to chronicle the history of EVE in documentary form. Sure there have been some Wiki attempts but nothing like an actual documentary. Enter A Tale of Internet Spaceships, a documentary about EVE and its community being produced by a group of media students in Sweden. Following the recent crowdfunding trend, they’ve chosen to launch an Indiegogo campaign to help with production costs.

I wanted to know a bit more about the project and its team, so I recently sat down with them in my inbox to discuss the documentary, the team, and the campaign.

Winterblink: First off, congratulations on what looks like a pretty successful start to your campaign. In just a short amount of time you guys have already received a respectable percentage of your end goal.

Winterblink: This is an ambitious project, once which will be trying to chronicle the history of a ten year old game and it’s expansive community, both of which have evolved significantly over the years. What do each of your team members bring to the party that will help the project succeed?

Petter Mårtensson: We’re not trying to chronicle the history of EVE. That’d be insanity, trying to figure out all the things that happened during the Great War, or the rise and fall of BoB, the origins of Goonswarm or… Yeah, you get the picture. Instead we’ll try to ask very specific questions about the actual nature of the game – the forming and evolution of the community and how its relationship with CCP looks. The latter is a complicated issue in itself and the one we’ll put the most focus on – it’s interesting not only from an EVE-perspective but from a consumer perspective. Personally I’ve worked in games journalism since 2004, I am an experienced interviewer and journalist, so I bring that to the team. I also worked with video for many years.

Philip: I’ve been working with recording and music production intensively for the last 6 years, that’s probably the main reason why Petter asked me to be a part of the project; to save some money on music rights. And when we arrive in Iceland, I’ll probably be in charge of checking white balance on cameras and carrying stuff. I seem to be made to suffer, it’s my lot in life. Elin is sadly sick and can’t speak for herself at the moment. But as a producer she has the great ability to make sure that we’re doing what we’re supposed to do, when we’re supposed to do it, in a bossy, but fair way.

Petter: We also have Seismic Stan on our side. ‘Nuff said.

Winterblink: You will never be able to satisfy everyone. You realize that, right?

Philip: Isn’t that the case with everything in life? We know some parts of the community are sceptical about this documentary, but we can only do our best to try to satisfy as many as possible.

Petter: We’re also very open to feedback and suggestions, so get in contact if you have any thoughts or fears.

Winterblink: The site states that you have previously covered CCP and EVE, has that been along the same lines of what you’re proposing to do here or has it been a part of some other community coverage?

Petter: I’ve been covering EVE in various forms since 2006, interviewing people like Hilmar, Zulu, Torfi, Nathan and others. I’ve been to Fanfest twice, to cover the actual convention in 2011 and the big push for Dust 514 (Swedish link, you’ve been warned) last year (which also resulted in a podcast with various people, including Seismic Stan and Manifest). I also covered Monoclegate quite a bit (and interviewed The Mittani about it, OMFG GOON BIAS), the event that inspired A Tale of Internet Spaceships. I grab hold of any CCP employee and shove a mic in his or her face whenever I get the opportunity.

Winterblink: What role, if any, will CCP be playing as part of your production? Will there be any kind of collaboration happening between them and your team?

Philip: They’ve helped us out with press access to Fanfest, and they’ve promised to help us get interviews with employees. Other than that, we have no collaboration with them and they have no say in the editorial process of the movie.

Winterblink: How are you planning on keeping the end product an honest and impartial one?

Philip: When it comes to filming documentaries, I believe that it’s hard to be completely impartial. Instead, we should be very clear about our subjective look into the questions we’re trying to raise, while making sure this doesn’t become some sort of propaganda film.

Winterblink: The EVE player community is, shall we say… a passionate one. There are plenty of sensitive topics in the history of EVE that will be like little landmines during your production. How are you planning on handling tougher issues, and more importantly how will you deal with any potential fallout in game? Remember, there’s a shiny new bounty system in place now.

Petter: There are absolutely some very sensitive topics that we’ll have to treat with utmost respect, especially since some are personal for both players and CCP employees. We’ll have to figure out which are relevant to the documentary and go from there. Speaking of the bounties, I gave themittani.com my character’s name… That might have been a mistake.

Winterblink: You’ll be present at Fanfest this year — that’s a handful of you versus hundreds EVE folks. Where will people be able to find you to get involved?

Philip: We’ll give out our e-mail so that people can stay in touch with us if they want to participate during fanfest, and plan to we wear t-shirts with the logo on it so people can find us on the showfloor.

Petter: We’ll be the guys that, together with people from CCP, look the most stressed out. Also, Philip’s flowing, golden hair and great looks should stand out in any crowd.

Winterblink: Outside of Fanfest, what are your plans for getting the views of the EVE community into your documentary?

Petter: It’s about budget, right? We’re only focusing on Fanfest at the moment – it’s the biggest gathering of EVE players and gives us easy access to CCP. If there is an EVE meet somewhere that we have the opportunity to go to, we’d of course jump at the chance.

Winterblink: I’m worried that relying on Fanfest coverage will result in only a more recent perspective of EVE. If you’re going to get into the history of EVE, what are your plans for making that content interesting beyond just a nicely produced recounting of events?

Philip: As mentioned above, we’re not getting into the history of EVE. But that would also be an interesting documentary to watch. Maybe the EVE-community themselves can make that happen?

Winterblink: What kind of EVE players are those on the team?

Petter: I’ve turned ship spinning into an art form. Weeeee! Seismic Stan, who helps us with research and other things, sends his regards and says that he’s been ”a carebearing industrialist missioner, a member of a low-sec alliance attached to CVA in the Providence NRDS era” and that he later led his corp to certain doom in null-sec as part of a -A- pet alliance. I was actually in that -A- pet alliance too. No, I’m not proud of it, but it’s not like we actually did anything. Except lag out in some huge, 1400-player scrap against Red Alliance (I think it was).

Winterblink: I have to applaud the thriftiness of your campaign, it seems you folks want the money to go straight into the production and not fluffy perks. If the campaign goes along at the pace it has been, you’ll be past your goal before the end of the funding period. If that’s the case, what can we expect the extra money to go towards?

Petter: Stretch goals are always tricky, especially since we want to keep the perks modest – there have been way too many Kickstarter or Indiegogo campaigns that lost a lot of money promising all kinds of toys, t-shirts and posters to their backers. When we’re closing in on the $6000 we’re hoping to raise, we’ll talk more about it.

Winterblink: How can we expect to watch the documentary once it is complete?

Philip: We will release it on a variety of social platforms such as Youtube, Vimeo and file sharing sites. Since this is a non-profit project, we want everyone to be able to watch the documentary without paying for it.

Winterblink: What do you and your team plan on doing after the documentary is done?

Philip: Probably celebrate! After that, most of us are getting back to school for our final year for our bachelor exam. If everything goes as planned with A Tale of Internet Spaceships, we’ll start to plan our next project straight away.

Winterblink: Thanks to you and your team for taking the time to answer these questions, and good luck on the fundraising campaign!

Petter: Thanks for having us! I’d like to take the opportunity to thank all the people that have supported us, both financially and by spreading the word. I should also mention that while me, Philip and Elin are the most visible, we have several other people helping us out behind the scenes – production assistants, graphical artists, researchers, consultants… Without them, this documentary would probably never happen.

If you think the idea of a community-made documentary about EVE Online is a cool one then head over to the campaign page and toss these guys some of your hard earned cash. In lieu of there being no “Taranis Love” option, I went with “Battleship Love” myself. There’s only two weeks left on the campaign, and this is a neat way to support the EVE community.