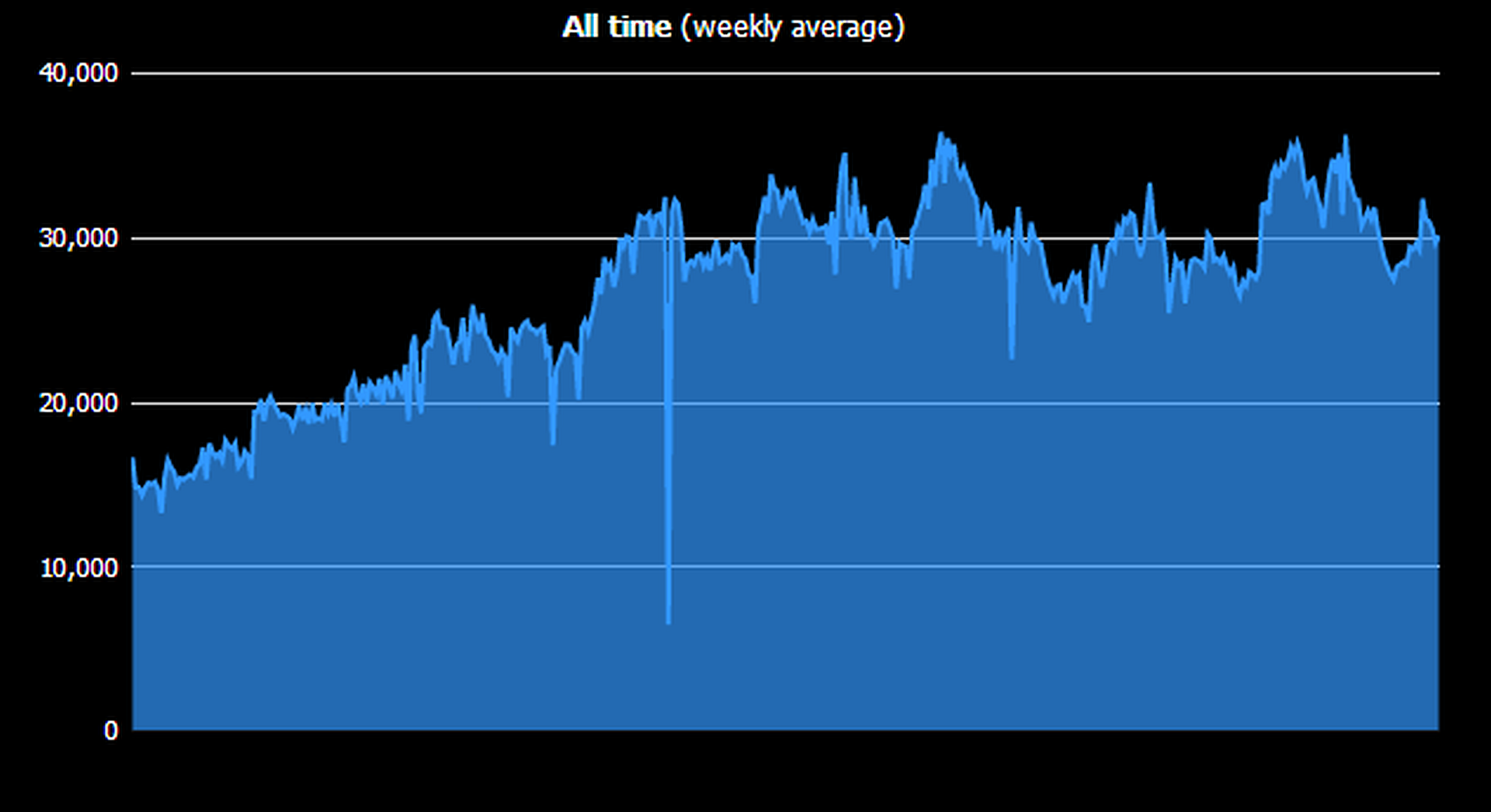 Welcome to the continuing monthly EVE Blog Banters and our 52nd edition! For more details about what the blog banters are visit the Blog Banter page.

Go to the always useful EVE-Offline.net (http://eve-offline.net/?server=tranquility) and take a look at the All Time (weekly average) graph for concurrent accounts logged in.

For the past four and a half years, the graph has hovered around that 30,000 mark; it is, for all intents and purposes, a plateau. But everything must come to an end sooner or later and that is what this blog banter is about.

What’s on the other side of that plateau?

Since its launch in 2003, EVE has seen a fairly consistent period of solid growth. At a certain point however, the jumps in player activity have really only followed expansions, a common effect with MMOs that have been around for a long period of time.  This isn’t necessarily a bad thing, but EVE is facing a hard road ahead, and I’m thinking the plateau will begin a downward slope soon. Lets look at a few of the reasons for this.

EVE’s subscription model has held its own for quite some time, but in the last few years the free to play model has really found its stride. The cost per month per month amounts are still competitive with other games which employ monthly fees, but the long term sustainability of this model may not be 100% secure.

The success of such games as Guild Wars 2 with a pay-once-play-forever model, as well as the migration  of many major MMOs to a free-to-play structure cannot be ignored. While the latter has not always been met with long term success, there are many cases where games have gone from being financial disaster to profitability almost overnight.

Of course, changes to subscription models usually come along with major design overhauls which would probably not be appropriate for a game such as EVE Online.  However, recent resource acquisitions by CCP indicate that they are quite aware of the need to become better-versed in the changing paradigms with this genre of game.

The Enemies at the Gate

Many of us have fond memories of playing space-based games in our younger days.  Whether that included trading in a procedurally generated universe or engaging in dogfights with spacecats, those games set the stage in our minds of what a well-defined universe sandbox could be. EVE has been scratching that itch for ten years now. This year however the successors of these games, spiritual or otherwise, are on the horizon waiting to pounce.

Games such as Elite: Dangerous slap a modern coat of polygons on what many consider to be the seminal classic of this genre. This fresh take on a game considered to be one of the the direct inspirations for EVE, headed even by its original creator, is looking to provide an incredibly immersive experience for those who have assisted in its crowdfunding.

And then there’s Star Citizen. I would imagine a huge percentage of corporations and alliances in EVE have at least one person who has sunk a couple of mortgage payments into this crowd-funded behemoth. The buzz around this game is incredible, and while I’m pretty sure it’s impossible for it to live up to its own hype there’s no denying the attraction that game has to those of us who are fond of massively online multiplayer space mayhem. Along with its attention to detail, it has what EVE currently does not: direct, hands-on control of your ship to explore and destroy with.

Even with just the above two games, the potential to usurp players from EVE’s clutches is high. But there’s no beating a free ride.

MOBAs like League of Legends and DOTA2 have a ridiculous number of players active playing them. World of Tanks, War Thunder, all games with zero dollars required to play them and all with free to play economies that don’t punish the wallet.  These may make excellent complementary games to EVE, but in order to play competently one has to play often. This can translate to more time away from EVE.

One might wonder why I even bring these games up as a reason for a possible future drop in that ol’ plateau but consider how many high profile people at CCP have moved on to work for Riot Games lately. If you’ve not heard how many, lets just say this: a lot. That’s experienced talent that’s sailed for other shores, taking with them a ton of knowledge about the game and its nuances.

Employee retention is a pretty important thing in the games industry, and one has to wonder if these departures are the result of normal turnover or an issue within CCP.

If it was any one of these things it probably wouldn’t be a big deal. The problem is that this year could present a perfect storm of issues that could play against CCP and EVE in the long run.

Is it all downhill from here for EVE? No of course not. CCP are still a bunch of smart people, and they’ve created a game that’s lasted ten years to overall great success and industry acknowledgment. They have yet to make DUST 514 into something that sticks, and if they can keep from extending themselves down a dead end again they should be able to come up with a competitive strategy that works in the long run.

“And why do we fall, Bruce? So we can learn to pick ourselves up.”