Apparently, giving us a month-long tournament of spaceships exploding isn’t enough for the folks at CCP.

As players we’ve been treated to a brand spanking new server cluster. Thanks to the immense downtime associated with that, we’re also getting some free skillpoints.

In gratitude for your patience and after consulting the Council of Stellar Management, we will give an extra pool of skillpoints to all accounts (paying and trial) that were active at the beginning of this downtime, on one character per account. This skillpoint pool will be appropriately sized for the downtime time frame, universal across all accounts regardless of character attributes/implants and may be applied as each player wants.

It’s not like you’re suddenly going to be able to insta-train to Titan 5 with this but it’s definitely better than nothing. Congratulations are in order to CCP for getting the cluster business sorted too, that’s definitely more than a cut-and-paste job.

But wait… there’s more! Apparently feeling bad about the loss of so many ships in the tournament, a magic wand is being waved in order to give us all a brand new ship, the Primae. Quoth CCP Zinfandel:

The Primae is a repurposed ORE design intended to ease the task of extracting resources from planetbound environments. Initially devised as a deep space salvage vessel for large-scale ore retrieval from destroyed ORE fleets in pirate-occupied areas, its previous incarnation was made all but obsolete by the arrival of capsuleers on the interstellar scene. Realizing that the ship could, with a few minor modifications, be made into an efficient resource harvesting aid, ORE wasted no time in revamping the design. 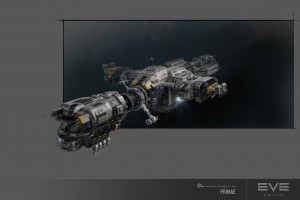 You’re probably wondering how and when you can get your hands on this wondrous machine of planetary … something.

Beginning June 29, 2010, you will find the ability to redeem it on your account login screen. You can then assign it to a particular character and a friendly ORE agent will deliver it to your hangar bay. You will be able to redeem the Primae once per active (not trial) account and will no longer be available after downtime on Tuesday, July 13th 2010, so make sure you log in to receive yours.

It may not be as pretty as the Hyperion but hey, it’s a free shippy ship!