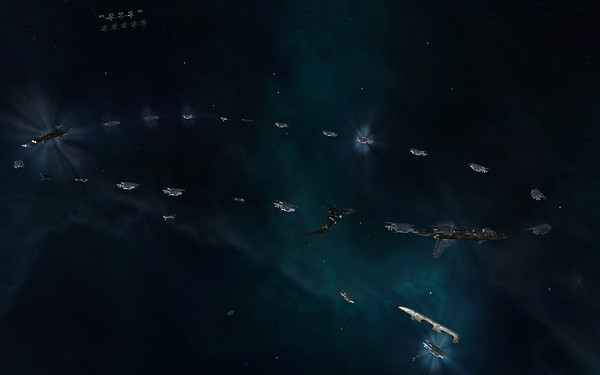 Blog Banters have been going on for quite a while, and are currently being managed by Seismic Stan over at Freebooted.  For some reason I’ve not really participated in them. Hoping to change that, lets delve into the latest banter offering:

“EVE Online sits on the frontier of social gaming, providing an entertainment environment like no other. The vibrant society of interacting and conflicting communities, both within the EVE client and without, is the driving force behind EVE’s success. However, the anonymity of internet culture combined with a competitive gaming environment encourages in-game behaviour to spread beyond the confines of the sandbox. Where is the line?”

Frontiers are interesting things.  They are unexplored places where the promises new discoveries and riches are balanced against fear of the unknown, and the risks of walking a path that has never been traveled before.

There are those that would like you to think that EVE Online is a game, but it kind of isn’t.  Oh it may wear the guise of a game like some dude trying on his wife’s dresses while she’s out, but it’s more like a universe simulator than a game proper. For we who visit this universe by logging in, EVE presents a frontier to be explored and exploited, risked, and even feared.

The formula for EVE presents a compelling picture of this frontier for players, and in my opinion can be summarized by the following statement: “It’s a blank slate populated by people, using things that people make with materials people work hard to obtain, all presented in singleton form.”

What you do in-game matters to others. You cannot escape causality.

The fact that all of this is driven by people on the internet is where things start to get quite interesting.  No other game really has this special mix of in-game holyshits and out-of-game whatthefucks, and it’s not because of the impressive nebula textures or the impressive server architecture. It’s because ripping off an alliance hangar can pay off your credit card debt, and the things you say in public at an EVE event could land you smack in the middle of a trending Twitter topic.

Back to the original question “Where is the line?”, the answer is almost impossible to define. The most obvious would be “is what I’m about to do illegal?”, and debate whether the potential repercussions are worth taking that next step.

It’s probably more interesting to ask the question “Where did the line go?”, since it’s much easier to answer: CCP took the line, and buried it in gravel somewhere for three months.  Then, piece by rotting piece, they ate it with a chaser of Brennivín as a test of manliness.

They did this by purposefully designing a system which fosters and rewards those who play it fast and loose with regards to the morality of their actions.

Happen upon someone absent-mindedly autopiloting around with all their expensive stuff through lowsec? Relieving them of all that burden nets you a nice reward. The game itself reimburses this with a bunch of numbers that go up. Your wallet will have more ISK in it, your security status gets a bigger (though maybe negative) number, you have more stuff to use or sell, maybe the bounty on your head gets some love.

Then the system lovingly delivers a shiny new kill mail to your inbox. You post it to your killboard, so you can see how you and your friends fought together against the blight on the universe known as Relocating Stuff. It computes a nice big number telling you just how hard you kicked that player in the balls, and aggregates it all into your own personal stats pile.

The spirit of this type of event is present everywhere in and out EVE – the gates, the asteroid belts, the marketplace, the forums, the blogs, and the media. And in my opinion, the community dramabombs blow up with explosions more glorious than those of any ship. Why? Well, they inspire current and potential players to look at EVE in a new light, one which highlights how there really isn’t anything out there quite like this.