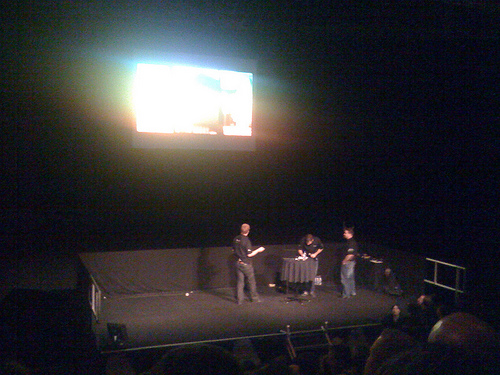 Brendan Drain’s latest over at Massively decided to detail four things he thinks other MMOs can learn from EVE’s example.  It got me thinking. Here’s his list:

I’ve got a few of my own that I figure are worth digging into.

Get Your Marketing Department Out of the Dark Ages

The world is social, and if your game’s marketing isn’t then you should probably fire them and hire someone more in tune with how to get the word out. When CCP started this it was a bit like a toddler trying to learn to walk on a moving treadmill, but I’m convinced they have some sort of fucking social machine sitting in Iceland hooked directly into transatlantic fiber.

They stuff content into the input receptacle and this thing fire hoses status updates and tweets like some sort of anime battleship main cannon.

Your pitiful level flythroughs and awkward combat animations are simply no match for Video Production and General Mindfuck department at CCP. The Inferno trailer teaches us a few things:

Oh yeah, and that EVE Forever video from Fanfest…  goddamn.

Your Players Know More About Your Game Than You Do

Lets face it, designing and developing a game is fine but it’s the players who put in the ridiculous amount of hours to learn your algorithms better than even you do. They write the most useful guides, they learn how to overpower your content with ease, and they understand how all the bits and pieces come together.

So why are you ignoring their advice so much?  Sure they’re not on your payroll, but they’re bankrolling your paycheck and are willing to help you improve your game through “passionate suggestion” on your forums. Hire a few folks with patience and the ability to communicate, and park their asses in a place where they can feel that pulse of your community.

I’m not saying you need to establish your own microcosmic democratic nation made up of players, just maybe when everyone is saying what you are about to do to your game is a bad idea you might want to take a moment and ponder the possibility of them being right.

Most other games stagnate to the point where they look dated, play dated, and generally aren’t worth the money when there are other more interesting options out there.  CCP continually invests in technical R&D, allowing them to do things like overhaul the entire game engine every once in a while.

Sure that’s risky, taking time and money but the benefit is your coming-up-on-a-decade-old game doesn’t look like it was made with Quake’s engine.

More importantly than just the visuals, look at the features of the game itself. Take the risk to say “this whole set of things, we’re going to have to change it to make the game better”. This is where I subtly refer you to the bit above about listening to what your players say, because if you communicate these changes early enough to your players you can get some awesome feedback on whether you’re on the right track.

Practically every MMO has a maintenance schedule, and that schedule usually puts the maintenance hours smack in prime time gaming hours for those crazy Aussies. Admittedly it IS kind of funny when you start playing a game and there’s the same threads in forums from Australians complaining about how they pay for the game too and would love to play it, etc.

They’re sort of right. Take the time to improve your maintenance processes so your game isn’t down for half a day.  A game as complex as EVE now has “blink and you miss it” daily maintenance cycles (relative to what they were like way back), and that’s impressive.  Australians may live on a floating prison where every animal has some mechanism of delivering lethal neurotoxins, but prime time availability means you have a bigger market willing to pay for your game.

You may also save money on not having to lock so many forum threads on the same subject.

Anyway, these are just a few of my own ideas.  There are probably bazillions more that others can come up with too so feel free to speak up.  Sharing is caring.