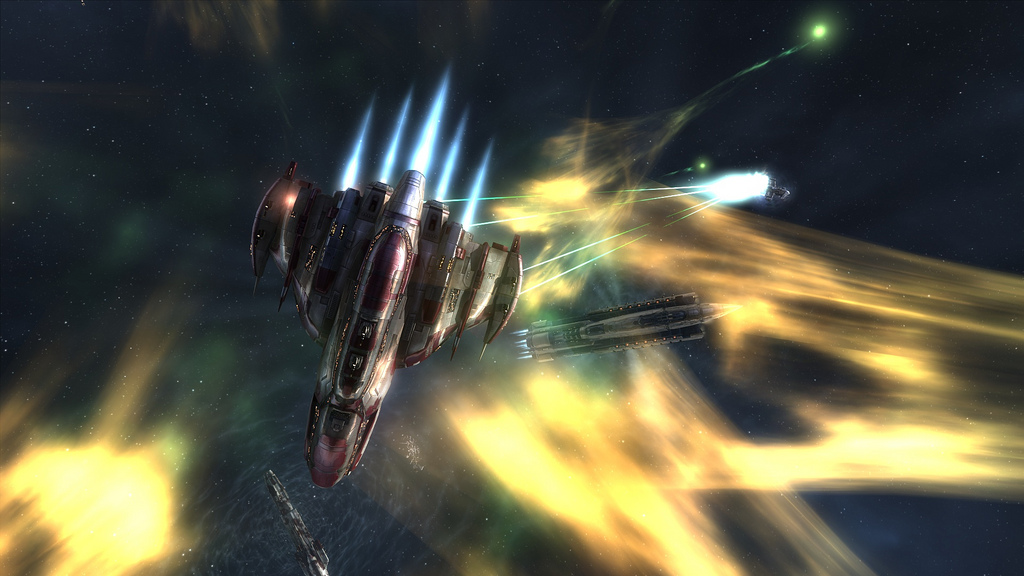 I make no secret out of the fact that I play other MMOs than EVE Online.  While they  do not hold my attention as long as EVE, the experience of playing them sometimes reveals some interesting features which I feel could be used to enhance other games. I’m currently loving the shit out of Guild Wars 2, and it reminded me of one of the things I feel has been missing in EVE: dynamic world content.

I’ve written in the forums years back that one of the things that is most lacking within the game is its lore. That’s not to say it is completely lacking, and the developers will be quick to say that the player community provides this in spades.  I wouldn’t disagree 100% with that assessment, and yet even CCP recognized the lack of story driven content when it began — and subsequently shafted — the COSMOS effort. I think now would be an excellent time for CCP to revisit something like that.

Similar to my previous forum post on the subject, I’m in no way suggesting we suddenly have an extension of the current agent system, providing missions in the current normal sense.  I’m pitching the concept of dynamic world content.

Guild Wars 2 builds on the public quest concept that was front and center in games such as Warhammer Online, allowing players to collaborate on quest content by going to an area and taking part in it without explicitly joining a party or zoning to a special instance. GW2 basically replaces the typical quest log with this concept, allowing for a more open approach to questing and quest activities. Additionally, and more in line with this discussion, it brings us branching dynamic story quests which require player interaction and often lead to an escalating — and still public — quest line. Players can come and go as they wish, be rewarded appropriately for their actions, and can even end up in the middle of a ridiculous boss fight to end the story.

I’m not suggesting CCP copy the concept word for word, however imagine the possibilities here if we apply an EVE-style mentality to the approach.

You undock from a station, and the new mission log UI shows flashing as you get a notification from a convoy that belongs to some NPC corporation. Its escorts are late, its supplies are needed at a station four jumps away, and it needs some security that it will make the trip in one piece.  You expand the log UI, it shows a planned jump route to you so you know its next destination and a countdown to when the convoy will warp to the first gate. You decide to tag along.

As the convoy warps off you warp with it.  It arrives at the gate 10km away and makes its way towards the gate, jumping through.  You follow. On the other side one of the ships is having a problem aligning to the next jump. Two minutes appear on the clock in the mission UI, and a few seconds later red +’s appear as a group of NPCs warp in to try to destroy and loot the convoy.  You begin to engage, attacking the enemies as other players who were warping to that gate decide to join in the convoy defense as well. With the additional help to defend the convoy during this encounter, the enemy NPCs call in additional reinforcements to balance the engagement. Suddenly there’s a much larger firefight on your hands, and still three jumps to go…

Rewards for players would be bounties on the NPC kills, loot from their ships, and loyalty points for the faction who’s convoy you helped. The event could even be extended by maybe a combat fleet at the station where the supplies are delivered asking for your assistance to help deal with the enemy NPC’s base of operations in that sector. You can help if you want, as much as you want, and be rewarded appropriately for your involvement.

An initial basic form of this could be done with simple encounter stages created like building blocks, that can be added to each other dynamically by the game depending on general randomness, player involvement, and level of success with the event stages.

And if we really wanted to add an EVE spin on the concept — and why the fuck not? — then allow for players on the NPC’s side to join in the attack on the convoy. This may require some sort of opt-in mechanism for the duration of the mission to allow you to be attacked and to attack people involved in the event, but imagine an empire space with this kind of dynamic content AND with a PVP element thrown into the mix?

So you’re there defending against the NPC enemies because that’s all you can shoot at, suddenly some players show up and begin shooting the convoy you’re trying to defend. You want to win this, you have enough friends on your side, so everyone clicks the button in the mission UI that lets you engage players who have clicked the same opt-in button for the enemy side and suddenly you’ve got a real fight on your hands with all the rewards that come with it.

This could be just one more way that time spent in EVE can be interesting and rewarding. Instead of grinding missions, you could go on a patrol through your home constellation for events kicking off, and take part in them as you see fit. CCP can weave in as much or as little lore in each event as they like, with the region or even constellation adding its own flavors to the party. Border zones between factions could have you attacking say Caldari ships, affecting your standings with that side. The results of faction warfare in the area maybe plays into things as well, even economic variables could be used — there’s no end to the amount and types of modifiers CCP could add to this over time.

In the end, the content is still primarily affected by the players who take part in it, and with a PVP element thrown in for fun the concept will still stay true to the roots of the game.