It’s been a busy last little while for dev blogs so I figured it would be a good idea to do a single wrap-up post about the new ones. I won’t go into meticulous detail on each, however links to the blogs themselves are at the bottom for further reading.

Probe Scanning and other Goodies for Odyssey

There certainly has been no shortage of drama over the upcoming scanning changes. It seems that with every new release of information, be it official or unofficial by folks trying it out on the test server, there are more worries that the changes are reducing the complexity of probing too much. CCP SoniClover gives a giant infodump of details just ahead of Odyssey’s arrival. 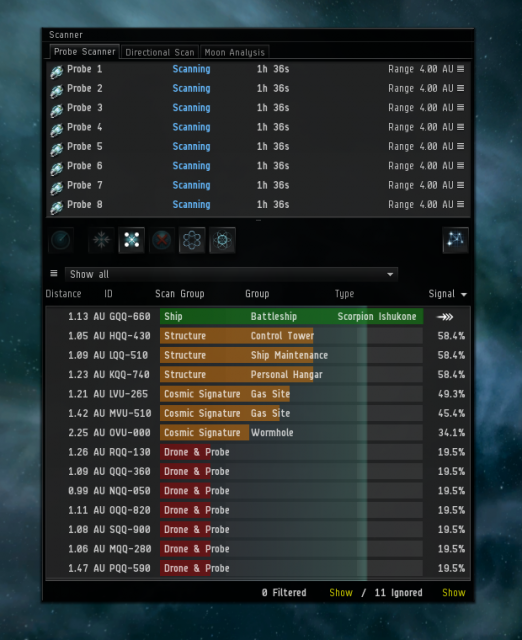 Rather than delve into all the details, lets explore a few of the more interesting highlights.

The recall and expire options have been changed a bit – recall is now instantaneous and happens automatically on system jump or dock. Probes still have a timer, but instead of being lost when the timer is out, they automatically recall instead. The system remembers your last probe setup before they were automatically recalled so they can be quickly deployed again in the same pattern (by activating the launcher).

I’d like to chalk this up as a streamlined process, and sure it will save people’s time, but words like “instantaneous” and “automatic” scare me when referring to things in EVE.

We changed the terminology of some of the exploration sites:

Updating the terminology makes a ton of sense to be honest. The current system doesn’t make a ton of sense when you consider that probes don’t have an explicit sensor type like ships do. This way you know what you’ve got in your results list right away so you can make an informed decision about which scan hit you want to pursue.

As part of the work Team Five-0 is doing, Ore sites (aka Gravimetric sites) are being made Cosmic Anomalies instead of Cosmic Signatures, meaning you no longer need probes to find them.

Every so often someone hints at the current mineral system of asteroid belts becoming scannable anomalies. While this isn’t being applied across the board, could this be a hint of things to come? With ice fields no longer appearing as belts with Odyssey, things could be getting more interesting in the future for miners.

CCP Bro is probably going for a word count record with his Alliance Tournament blog. There’s way too much information there to comment on explicitly, so hit up the blog in the link below. They do want folks to pay attention to the following:

Major changes from previous years that you shouldn’t miss include:

Whether you plan on competing in the event or viewing it, some or all of the following dates will be worth keeping in mind.

U and I made some changes: Odyssey UI changes

CCP Karkur spills the beans on a fuckton of UI fixes coming, most of which centered around maintaining player sanity and improving quality of life for players.

The blog included the following screenshot of the right click menu improvements made to the Watch List. 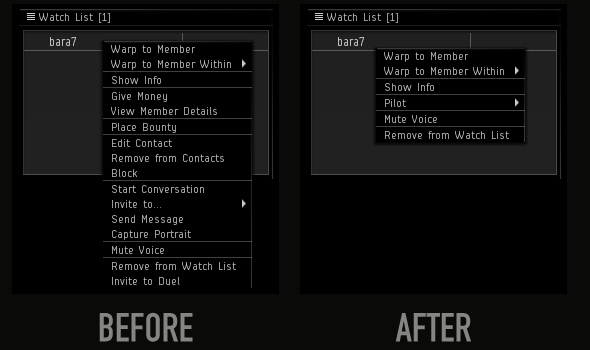 This is the kind of thing that smacks you as a no-brainer for anyone designing a UI, and calls into question the decisions behind the “Before” layout. My guess is that while implementing the new radial menu changes, all of the right click menus came under intense scrutiny in order to identify most frequently used items.  However I do have to giggle a bit at an initiative designed to remove UI clutter, at odds with one designed to reduce menus within menus.

So we made a small change so now when the ship is popping off your target list because it’s dead, it will blink a few times before it disappears so there should no longer be any confusion about whether the ship went down in flames or managed to warp away. Tl;dr: It blinks: “He’s dead, Jim.” It disappears: “She got away, captain.”

The fleet window also gets some love, with current features being improved as well as copy-pasting of fleet compositions. Hit the blog for all the details on these and other changes.

I realize of course that UI is the front and center part of EVE for all of us so there are certainly efforts by other teams to improve other less in-your-face aspects of the game. However, these guys have really been impressing me with what they’ve done to the front-end of EVE. Their team is one whose blogs I look forward to reading.

EVE on Steam: Past, Present and Future

EVE’s been on Steam for quite some time now, but soon its presence will be a bit more than just a basic game storefront on the Steam Store. CCP Spitfire gives us some details about what’s coming. 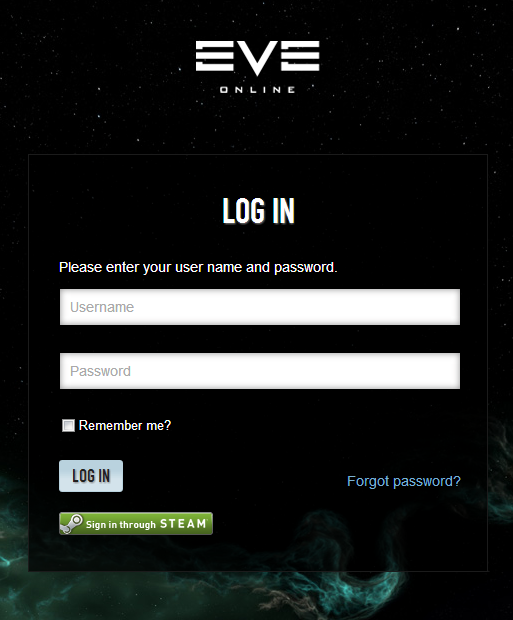 Coming soon you’ll not only be able to log in to EVE with your Steam credentials, but you’ll also be able to pay for your game time through Steam’s billing service.

First of all, tomorrow you might notice a new Steam icon on the EVE web login page. This means that you no longer need to manually create an EVE Online account after buying the game activation key on Steam; instead you use your Steam credentials to log into the game and the websites. This has been made possible by the Single Sign-On (SSO) technology developed by Team GForce.

Furthermore, players who have bought EVE Online on Steam from May 31 will be able to pay for their subscription on a recurring basis and buy PLEX packages directly via Steam, thanks to the back-end work done by Team Mammon.

One of the most compelling future possibilities was mentioned as well:

Other aspects of Steam we are potentially very interested in are the Community Hub and Steam Workshop – our community team has already started looking into the possibilities here, and we would love to hear your feedback on this as well.

Now those who’ve played other popular Steam games such as Team Fortress 2 will have already perked up their ears about this point. For those who don’t know, Steam Workshop opens up a whole world of community-created content possibilities for games. Who knows what kind of interesting things CCP could enable through this, but the success of the Steam Workshop with other games proves that it’s a viable platform for fan made content.

All in all, this has been a really busy week for dev blogs, not entirely unusual as the Odyssey expansion is right around the corner and major feature development has probably been frozen for a while.  There’s a lot of cool stuff coming, and it’s always nice to have the sneak peeks.