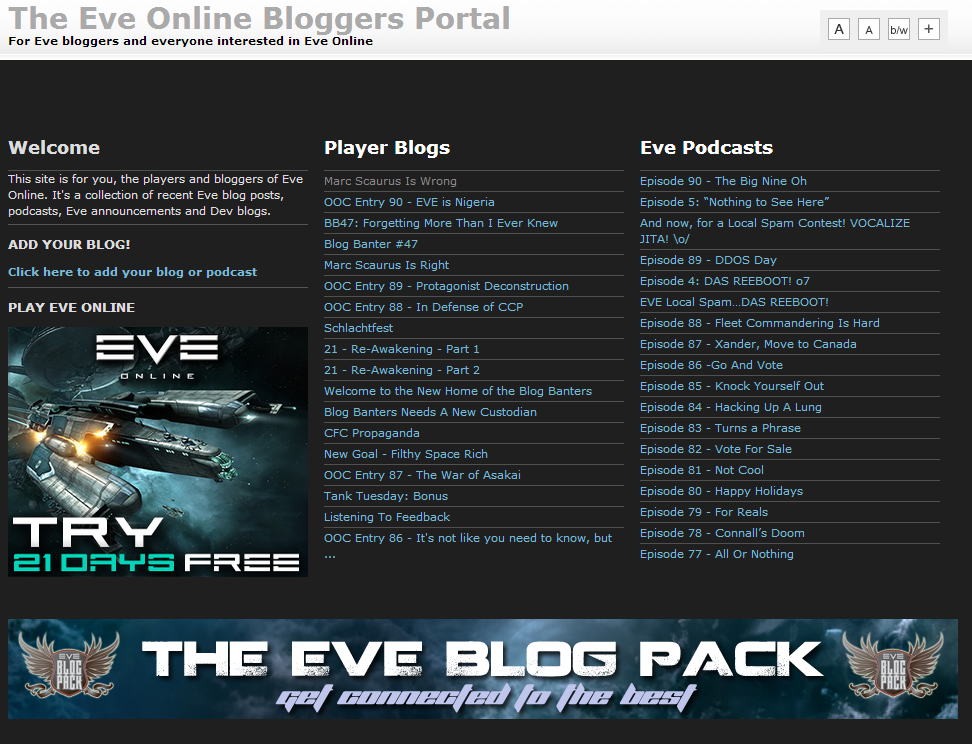 The EVE blog scene has been a bit heated as of late. Transitions for sites to new owners, and shakeups between similar sites have proved that in game and out of game, EVE Online drama knows no bounds.

Currently in the middle of both of those mini-whirlwinds is Cyber (@CyberInEve), the new manager of Eve Bloggers. I wanted to catch up with him about the site, and to discuss some elements of the recent interview done here by a competing site.

Winterblink: EVE blogs have caught a lot of attention lately, so what does Eve Bloggers bring to the party?

Cyber: I’ve still got a lot of ideas running through my head for Eve Bloggers, but for the most part I want to keep it the same concept that it started as, a stream that allows people to easily follow the blogging community.

I have plans to add a few more community type features to the site (secret for now :)), as well as other useful resources for the blogging community (and hopefully the greater Eve community itself)

I actually posted a shortish post on the Eve-O forums that explains it a little more in-depth. (Link to thread)

Winterblink: You’ve inherited the site from Marc Scaurus recently, can you talk a bit about how this came about, and how you feel about taking on the responsibility?

Cyber: Perfect timing I think was a major factor in it. I recently got back from a little over a year off of eve due to real life issues, and when I came back I heard rumors that Eve Bloggers wasn’t being updated anymore. I’ve always been a huge fan of the site, and as an avid blogger and webmaster I immediately wanted to see what I could do to help.

When I saw Marc post about looking for a new owner, I jumped at the opportunity. I actually didn’t think he’d pick me since I had just got back from a long absence, but I guess my expertise in the area made me a good candidate. As for the responsibility…I’m deeply humbled by taking ownership and from the feedback I’ve gotten so far. Marc did an awesome job with the site (and Alexia before him), so while I have changes in mind, I also want to stay true to the initial concept of the site and not change it too much. As we both know…the bloggers are a rowdy bunch so I want to make sure it stays a resource that they approve of.

Though, I guess that got off the topic of responsibility I bit…which I guess you’ll find out, I ramble a bit at times. I know it’s going to be a time consuming job but I have a feeling it will be very rewarding to watch the site (and more importantly the community) begin to grow.

Winterblink: You mentioned Alexia; I recently did an interview with him about his own EVE blogging site, and there seems to be some drama with regards to the two services. Assuming you’ve read that interview, I’m going to put you on the spot and ask whether you had any response to some of the assertions made about Eve Bloggers.

Cyber: Well, to start with, I think most of the drama that popped up was more about his new site than Eve Bloggers (or with what he wanted to turnEve Bloggers into if he got it back). Eve Bloggers was create by Alexia to be a “stream” of blogs for the community…yet somewhere along the line he decided that he wanted to confine the blogging community to one website rather than allow people to remain individuals. I do think he had good intentions, I have no issue with Alexia personally…just with that idea, I don’t think it works well for this type of thing. A good example would be podlogs, it was a good site while it was around…got new people into the blogging community…and then it disappeared, leaving tons of people stranded and having to find a new place for their blogs.

While I’m not going to say that Alexia is going to disappear, what happens if he does? What if he loses interest, gets bored, has personal issues, etc. It will put whoever is using the site to host their blogs into the same predicament as podlogs did…having to find a new home for their blog with very little notice. A bloggers domain is his identity…changing it is a big deal. I originally was interested in working with Alexia, somehow working together with the two sites, although we never could figure out how to do so.

Then, when I read your interview with him…where he seems to have lost his temper and decided to bash those of us who prefer to run our own blogs…I realized that working with him would not be an option for me. In my opinion, the blogging community is a group of people…we don’t all have to have our domain at noidentity.blogsite.com.

I’m not sure what he was thinking with those comments. I know it personally made me decide not to support his endeavors…and while I can’t speak for everyone, I’m sure there are plenty of other bloggers that thought the same thing. Not many people enjoy being told to go screw themselves and that their opinions don’t matter…especially when everything we do is based on our opinions as bloggers.

Winterblink: There is an important distinction to make between the two sites really. Alexia is building a blogging consortium of a sort, hosted on his service. You’re administering a kind of Google Reader (RIP) for EVE blogs, aggregating the existing community. Is this assumption generally correct?

Cyber: I think that’s a safe way of putting it. Eve Bloggers intends to be a resource FOR the community, while it seems Alexia is trying to make a site to BE the community.

Though I do intend to add other features to the site that aren’t just based on aggregating content (guest blogs, guides, other eve related links, etc)…I intend to allow the eve community itself to help form the website into what they want it to be through the use of polls and suggestions. I want it to be about the community and not about me.

Winterblink: The blog hosting part of his site is certainly useful (and free) to those who want to start their own, though it will be a bit of an uphill battle against full featured blog hosts like WordPress and Blogger. That’s definitely going to be a challenge for him, and frankly anyone trying to be the EVE Online Uber Community.

You mentioned Alexia potentially leaving his site stagnant, and how that would affect users of his service. I have to point out, isn’t that exactly what happened to Eve Bloggers in the past?

Cyber: That did happen to Eve Bloggers, and funny enough Alexia was the one that had to give it up, but it went stagnant because of Marc (not Alexia). However, Eve Bloggers does not host peoples blogs so even if Eve Bloggers ended up stagnating again, it would cause no danger towards peoples blogs. (although I do run my own hosting company and have been debating opening a hosting service for isk up sometime, but that’s another story for another time :))

Winterblink: Thanks very much for taking the time to chat with me between fights in EVE.  To wrap up, if folks out there are interested in trying out your site as a blog owner or reader, where should they go?

There’s no shortage of opinions in EVE, and blogs allow people to formulate those more than a simple forum post or tweet. In the absence of Google Reader, aggregating the RSS feeds from all the different EVE blogs can be done with newer services, but finding the blogs in the first place isn’t always easy. With EVE Bloggers now under new committed management, it stands to become another valuable source for people to go to for discovering new and interesting things from the EVE community.