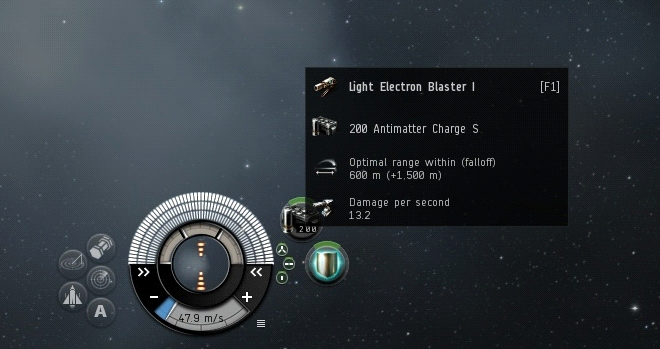 Today CCP bequeaths upon us a grand update to EVE Online, Inferno class. With update 1.2 there’s quite a few items of interest in the patch notes, so lets jump in and speak to a few of the items worth additional attention.

Module mouseovers seems like something that should have been in the game from day one, but I’m happy to see them now.  Basically put, all the most interesting information you would probably want to see at a glance now can be seen at a glance rather than playing the Menus Online minigame to get to it.

Knowing right away what your your stuff is going to do when you push that button is a handy thing.

We all love doing missions (… right?), but isn’t it annoying to have to hunt down your Journal and find the tab with the information about what you should be doing?  Sure is, but not for long.  How about a nice GUI overlay available to you so you can get relevant mission information at a glance?

Ships sharing lineage with the Angel Cartel will get some cosmetic surgery with updates to their visual assets. While in and of itself this is not earth shattering, it’s part of CCP’s ongoing efforts — and dare I say successful ones at that — to push the game’s visuals to even more impressive levels.

As someone who takes frequent screenshots I’m OK with this, but in general it’s always more fun to blow shit up if it looks awesome to begin with.

CCP is waging war on ship tiers, taking stuff like Tech 1 frigates and making them more effective in the game. For this patch, tier 2 frigates such as the Atron and Executioner are getting makeovers. The end result will be tech 1 frigates capable of being very effective at dealing damage and tackling.

This basically turns them into cheap baby interceptors, which is not a bad thing at all unless you see a shitload of them coming at you.

One of the more interesting changes, and one which is a long time coming, ensures that those who choose to suicide their way out of combat will provide their attackers with delicious loot. Previously this would be used as a mechanism to rob one’s opponent of spoils if you know you’re going to lose, but no longer.

This will especially piss of people who fly big expensive ships, ships with juicy faction modules, or combinations of the two.  But that’s ok, because the change will also make a lot of people very, very happy.

Anyone who’s ever looked at the hardwiring implant section of the market has at some point wondered whether the folks responsible were grinding up and snorting the old classic CD-based copies of EVE. This area is a total mess to deal with, and requires far more time out of your day to figure out what the hell you want to buy and why.

The good thing is that’s changing, with that area of the market being overhauled to be more descriptive instead of baffling.

In what is probably the most important fix in the entire set of patch notes, activating acceleration gates will now trigger music to begin playing properly.

Imagine that moment of utter confusion, wondering why the fuck aggressive techno suddenly started blasting out of your speakers as your ship hurtles on to its next destination. Then, subsequent moments tabbing back to the client after checking other applications for the source of the music, realizing you’re now well under attack by god-knows-what. Surprise!

Actually, now that I think about it, the uneasy silence of it NOT triggering was probably more freaky.

There’s a big giant pile more changes at the link below, so go check it out. CCP has taken a great deal of effort to clean up some of the dumb small oversights throughout the game, as well as providing larger changes to keep things fresh.

Ok, so people were wondering why I didn’t put anything about the changes to mining barges, and the main reason was that I felt the discussions elsewhere covered off all the major points worth discussing. But ok, fuck it.

Prior to this update, barges followed the usual ship progression where more training and cost got you a ship which did a generic job better than the previous tiers. Exhumers were specialized with bonuses for particular types of mining (ice, mercoxit, etc.).

With 1.2 this is all different, with the ships being clumped into two tiers consisting of three variations boosting stats in the areas of defense, mining output, and ore hold capacity. If you want to specialize in one area similar to exhumers of the past you can, but you will need rigs to do it.  Throw in considerable changes to the overall cargo capacity, tanking, and mining abilities of the ships and you have a recipe for carebear rage.

Is this good or bad?  Well, it’s certainly different, and has some potential to fuck over people who trained to specialize in one way according to the old rules. It also means if you want to continue to specialize you will be either swapping rigs or buying another ship to fit out for each method of mining. That cuts into profit margins, which you may see significantly reduced anyway since your favorite mining vessel may now be the worst for your needs.

When they first announced they were going to tromp around the yard messing with ship tiers I knew there was going to come a time when CCP would step on a rake. In my opinion, this is the first time of several coming for them, and since it affects the economy of EVE it will be a particularly interesting change to watch post-release.